Swami Kuvalayananda (30 August 1883 – 18 April 1966) was a researcher and educator who is primarily known for his pioneering research into the scientific foundations of yoga. He started scientific research on yoga in 1920, and published the first scientific journal specifically devoted to studying yoga, Yoga Mimamsa, in 1924. Most of his research took place at the Kaivalyadhama Health and Yoga Research Center which he also founded in 1924. His influence on modern yoga has been “profound”.

During his student days, he was influenced by political leaders like Sri Aurobindo, who was working as a young lecturer at the university, and Lokmanya Tilak’s Indian Home Rule Movement. His national idealism and patriotic fervor prompted him to devote his life to the service of humanity.

Coming into contact with the Indian masses, many of whom were illiterate and superstitious, he realized the value of education, and this influenced him to help organize the Khandesh Education Society at Amalner, where ultimately he became the Principal of the National College, in 1916.

Kuvalayananda’s first guru was Rajaratna Manikrao, a professor at the Jummadada Vyayamshala in Baroda. From 1907 to 1910, Manikrao trained Kuvalayananda in the Indian System of Physical Education.

In 1919, he met the Bengali yogin, Paramahamsa Madhavdasji, who blessed Kuvalayananda with insights into advanced yogic discipline.

Though Kuvalayananda was spiritually inclined and idealistic, he was, at the same time, a strict rationalist. So, he sought scientific explanations for the various psychophysical effects of Yoga he experienced.  The idea of discovering the scientific basis behind these yogic processes became his life’s work.

In 1924, Kuvalayananda founded the Kaivalyadhama Health and Yoga Research Center in Lonavla in order to provide a laboratory for his scientific study of Yoga. At the same time, he also started the first scientific journal devoted to scientific investigation into yoga, Yoga Mimamsa.

Besides his yoga research, Swami Kuvalayananda  spent much of his later years opening up new branches of Kaivalyadhama and enhancing the main Kaivalyadhama campus in Lonavla.

Mumbai and Rajkot branches were formed and the College of Yoga and a Yogic hospital were started. 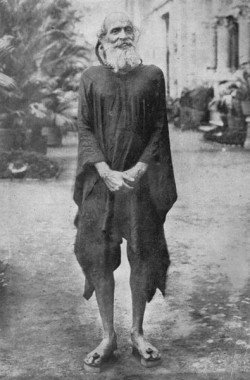 Paramahansa Sri Madhavadasji Maharaj (1798 – 1921) was a great Master of Yoga from Bengal, who after 50 years of traveling India by foot and practicing yoga in the solitude of the Himalayas, had settled, at the age of 80, to begin teaching.

Paramahansa Madhavadasji was a major advocate for the revival of yogic practices, which had almost died out in much of India at that time. He encouraged Swamiji to scientifically investigate the effects and benefits of Yoga practices, for the propagation of health, and spiritual inspiration of all humanity.

In response to his Teacher’s request, Swami Kuvalayananda went on to establish the Kaivalyadhama Institute. Established in 1924 it was the first Yoga Institute of its kind in India, and continues to be a premier center for the medical and scientific study of Hatha Yoga, as well as a resource of ancient texts, teachings, training and yoga therapy.

Paramhamsa Madhavdasji’s patron had invited a photographer from Mumbai for a group photo of all disciples standing with the Guru. Paramhamsaji was very reluctant but the host was very adamant. The group gathered, Paramhamsaji was in front of them. The photographer arranged the group and finally clicked. He developed the negative. But very strangely Paramhamsa Madhavdasji was missing from the photo. All the other members of the group were there. The tree behind Paramhamsa Madhavdasji was there, the sandals of the Guru were there, the Kamandalu was there in mid air, but he was not there! It is like being in a Jivanmukta state – the Yogi is free from responsibilities, as if free from life! He behaves like a free spectator. The things happen as they should. The Yogi just watches and remains a spectator though performing his duties. Giving up the “I” element may help in causing miracles. In genuine miracles like duringDharmamegha Samadhi of yoga, the Yogi does not want or even does not think of performing a miracle and yet they happen – automatically, naturally, on their own. A good person is suffering and we all feel sad. In Dharmamegha, the Yogi sees the innocent man suffering and just this awareness of the Yogi seems to stop the cruel thing happening!